About that Frozen Glassware You're Using

As a youngster in rural eastern Washington, one of our favorite treats during the hot summers was a trip to A&W for an ice cold mug of root beer. I cannot say if the glasses were stored in a freezer prior to being filled and delivered by car hop to thirsty patrons. But it appeared so. 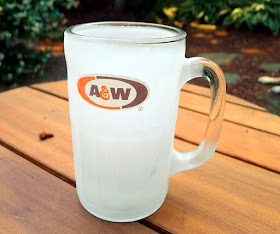 I somehow have a number of friends who apply similar serving values to craft beer. They store half a dozen mugs in their deep freeze, right next to chunks of meat stored for winter. Or maybe the mugs have a spot in the inner door.

Drinking from a frozen mug is almost certainly a carryover from the heyday of macro lager. You wanted to drink that stuff as cold and fast as possible. Drinking a warm macro beer is risky. That's when you start to pick up on aromas and flavors you'd probably rather not think about.

My athletic club, bless its pointed little head, still serves beer in frozen pitchers and glasses. That's likely because they've been doing so for 30-plus years, and because they had mostly macro beer until recent times. They carry on with the frozen approach because they aren't serving a knowledgeable clientele and don't care.

Beer geeks and educated beertenders know you don't want to drink craft beer from a frozen glass. That's why you almost never see it happening at geek tastings or in respectable beer bars. A lightly chilled glass, maybe. A frozen one, not a chance. It's a topic that's been covered in a variety of places over the years. I'm just piling on.

What's wrong with drinking good beer out of a frozen glass? It messes with the flavors, kids. The beer hits the glass, mixes with ice crystals and a portion of it freezes. There's additional foaming you don't want, as well, but the main problem is the beer gets too cold and some of the flavors are lost, muted or altered.

As Julia Hertz says in this Brewers Association video, frozen glassware is not preferred in craft beer. For all my friends and acquaintances who continue to amaze me by continuing to drink good beer from frozen glassware, fine. But you aren't tasting the beer as the brewer intended. Your move.
Pete Dunlop at June 27, 2016
Share