No Sane Person Has a Clue What's Coming

Back when I was working on my book, Portland Beer, I interviewed a lot of well-connected folks. One was Gary Fish, founder of Deschutes Brewing in Bend. He provided several interesting comments, which got even better when I read Jon Abernathy's book on Bend's history. 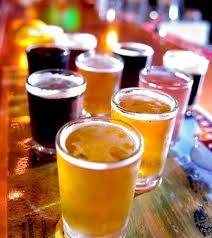 Keep in mind that Fish is a guy who stuck out the early days in Bend, a time when the pub was vacant many evenings. Success wasn't assured. One of the last questions I asked was if he had in any way anticipated what craft beer has become. "No sane person would have," he retorted.

I bring it up because we are nearing the end of Portland Beer Week, possibly the craziest 11 days on the city's annual calendar. The event, actually it's a nearly endless series of events, has been around for several years. Like the rest of the industry, it keeps growing and growing.

This year's rendition included release parties, tastings, festivals, dinners, seminars and more. The seminars aren't new, to my knowledge, but there were more of them this year, I suppose because there's intense interest in how beer is produced, marketed and so forth.

For the past two weeks at least, my email box and social media feed have been packed with event invitations and reminders. I attended only a couple of events intentionally, then walked in on one unintentionally. That's how nuts it is.

So forget Gary Fish's comment for a moment. He was certainly right. Ask yourself, instead, where this industry will be in a year? Or in five years? Better yet, what will it look like in a decade? The answers are far from certain.

There's a great column in the June issue of BeerAdvocate Magazine by Andy Crouch. In it, he talks about his experience at the recent Craft Brewers Conference in Philly. The conference has grown by leaps and bounds in just the last 10 years. I attended last year in Portland. Bonkers.

Crouch, who's been writing about craft beer for quite a while, talks about walking around the hall and not seeing many familiar breweries. There was a time when there weren't that many brewers. Or writers, for that matter. People knew each other. It was quaint. Those days are over.

You look at CBC and at PDX Beer Week and you see hordes of craft beer fans. There's a certain freneticism surrounding the industry, with more people and more money flowing in and countless new breweries and related businesses opening all over the place.

We can look back and see where craft beer came from. If you know the story, you know the revolution got off to a sluggish start 30-plus years ago. But it's ramped up considerably in the last 10 years. The pace of growth and change is so rapid now that it's almost impossible to keep up.

Many years from now, someone in today's industry is going to be asked if they anticipated changes that happened on their watch. And their response will almost certainly mirror Gary Fish's: "No sane person would have."