The Unfortunate Rise of Beer Geekery

My friend (I use the term loosely) Jeff Alworth just posted a piece that explores why he doesn't feel he's a beer geek. It's a fairly nuanced review of the differences between a beer geek and a beer nerd, and how those beasts, if you will, behave out on the open beer range. 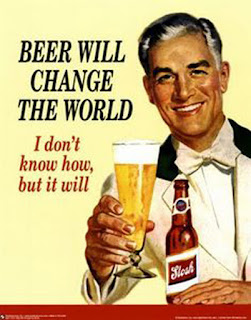 In fact, Jeff isn't a beer geek. He's not particularly interested in chasing down new beers or trends. You want to experience a new brewery with Jeff? It's not tough because the list of relatively new places he hasn't been to is long. Invite him to meet somewhere. Anywhere. Please.

By his own admission, Jeff is a beer nerd. He writes books about beer, beer styles and (often) antiquated brewing techniques. He's interested in the types of things that bore your typical beer geek to death. As John Foyston and I decided several years ago, Jeff enjoys, "thinking about beer."

While Jeff was thinking, a crowd of craft beer super fans reached legal drinking age. And it continues to grow. These are the folks you see waiting in line to buy special event tickets or taste rare beers. They're the ones you see drinking trendy beers and yacking relentlessly about all the new breweries they've been to. They know everything there is to know.

Except how to enjoy a beer. Because the simple act of enjoying a beer is largely lost on this crowd. If I had to compare it to something in my own experience, I'd say it resembles what I saw with music when I was in college. Everyone wanted a fancy stereo with lots of sexy lights and switches. The stereo itself became the center of conversation and attention. The music was secondary.

Jeff adds some useful perspective on our present situation in his post:


I could give up beer, the beverage, more easily than I could coffee. By far. But what I'd find very hard to give up is the simple pleasure of sitting with people in a pub and enjoying a pint. In that context, I like a good beer, but it isn't the central feature of the outing. This view is far more prevalent in pub-going countries, where people regularly drink a lot of beer over the course of a year. But the term "beer geek" just doesn't fit. They're beer drinkers, and surely beer lovers. But not beer geeks.

As I've said in previous posts here, I believe beer geeks are driving a lot of the growth in craft beer. Particularly when you look at dollar volume growth and the growing importance of high end product. Most of that stuff is being bought by beer geeks. Cost is no object with these folks.

Not that long ago, you could walk into a brewery or pub, choose your beer from a short list and enjoy it. You might even order a pitcher to share with friends. Choosing the beer wasn't complicated. You made a judgement call and lived with it. The beer wasn't the central feature of the outing.

That's changed...or is changing. Many can't order just any beer today. They crave something new or special, something that can be showed off and discussed at length. The days of beer being a secondary, casual part of the experience are in decline, possibly rapid decline, for many.

Good beer has certainly changed how we think about beer. And mostly for the better. But beer geekery may be one of the more unfortunate developments of the craft era.